Garden of the Eastern Star

Since buying the Wheeler Mansion, I have always had the vision to transform the large empty lot behind it into a hedge maze. Through working closely with the Design Department at the University of Massachusetts, we pitched the idea of designing the garden to the graduate students as their final project. A graduate student named Rebecca Bagdigian-Boone took on the challenge.

Currently a graduate student at UMass Amherst studying Landscape Architecture, Rebecca’s interests range from public art, green infrastructure to community gardening and skateparks. She hopes to find ways to explore these in her future career. She received her BFA in Architectural Design from MassArt and is excited to be a witness to the restoration of the Wheeler Mansion, and to be a part of the garden design.

Except for telling Rebecca that I want it to be a homage to the ladies of the Order of the Eastern Star, I gave her free reign to put together her idea for the garden. Rebecca has put together the design shown in the image here and it is absolutely amazing to work with someone who brought my vision to life! Check out information below on how you can also be a part of the project too.

Owner of the Wheeler Mansion 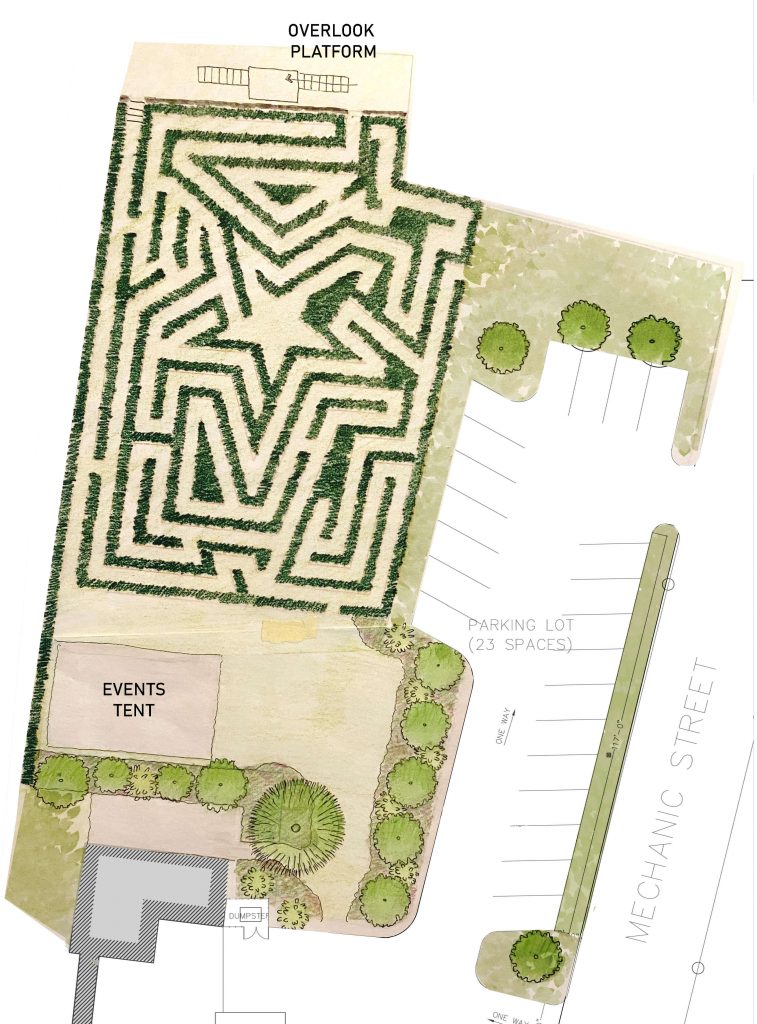 While we are still in the process of presenting the idea to the Planning Board and getting the approval from the town, in the interim, we are raising money for this project. When I first planned build a hedge maze, I already put aside some fund for this project. However, with the fire alarm and sprinkler systems costing more than what I had initially expected, the fund previously put aside for the garden was diverted to make sure the Mansion is compliant.

While abandoning the hedge maze idea would have been the easy solution, the location and the size of the empty lot were such a match make in heaven for this sort of ideas! Determined to bring this to life, I have been doing fund raising campaign the past few months. For Easter this year, I hosted a Easter Egg Hunt at the Revival Wheeler Mansion and also did a raffle ticket sales. Almost 700 tickets were sold during this event! Thanks to everyone who took part. I hope the winners enjoyed their prizes!

We are also currently doing another fundraising campaign. If you want to be a part of the process and leave your mark on this beloved historic property or memorialize the dearly departed in an “In Memory Of” tribute brick, make sure to check out the link below for more information!

First event held at the garden

To wrap up what was an amazing week of Harry-Potter-theme events at the Mansion and across the Town, we decided to host the highly-anticipated Hogwarts Ball at the Mansion. Given the space and the limitless possibilities in the Garden of the Eastern Star, there was no better place to host this than here. While renovations continue to take place, a completed section of the Garden was put to great use! As shown in the photos, it was an absolutely magical night and we can’t wait to host many more events and parties once the Garden has been fully completed.